The Last Bastion of Steampunk Living

People have been barricading them themselves from  enemies and the elements since time immemorial. Coastal  cliff sides are ideal look out points. Over the millennia  hillside forts have transformed from hidden caves to hurl rocks from - to concealed coastal caches of ammunition and gun emplacements.

With the advent of long rage missiles  and satellite surveillance, the sturdy forts of last  few world wars  had become redundant. Abandoned  and cast away.

Now they are being put to a new purpose on the home front. 
Palmertons's Follies [ named after the  British Prime Minister  of the time]

Built in the 1850s to fend off the French  threat,  these forts  are still standing strong  against the waves and are enjoying  a resurgence as luxury accommodation and private dwellings. 
The Maunsell  Forts ran down the river mouths of the Thames and Mersey .

Time has marched on The interiors of the installations  are ideal back drop for the vintage industrial look. The Cold War  in the freezing seas


The US had its own forts for radar facilities that mushroomed   during the cold war of the  50s.  They had that  atompunk appeal for the post apocalypse Now lying as sunken treasure on the sea floor.

Military  Monuments of the Maginot Line After fighting off marauders from mainland Europe  down the centuries, forts down the  Maginot Line  were given a military make over  in the post WW1 period. 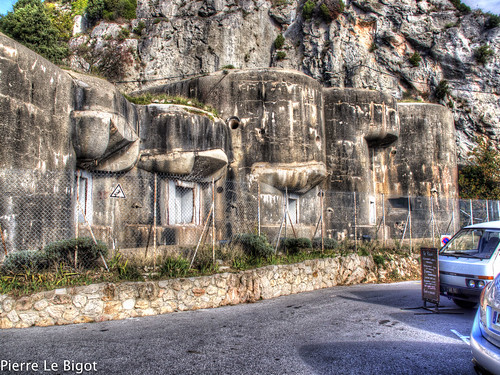 St Agnes set into the hillside Beside them   in Belgium Tunneling down . The French  have always done  decor with a little more style. Along the Atlantic Front


The  Germans put military  emplacements all along the  Atlantic seaboard to keep enemies at bay. It was a decade of  Deco design. Poland Protections of the Past Ready for a Refit


Do your own Dieselpunk  decor  and steampunk Stylings ; add that Atompunk atmosphere. Raid the recesses of your imagination . Play in  your own  Private Para Military Paradise There is Always  Light at the End of the Tunnel.